Free download Adobe Macromedia FreeHand MX. It is another graphic application for computer which is used to create two-dimensional vector graphics. These are primarily oriented to desktop publishing, professional illustration and web content creation. Macromedia FreeHand is similar to CorelDRAW, Adobe Illustrator and Xara Designer Pro. 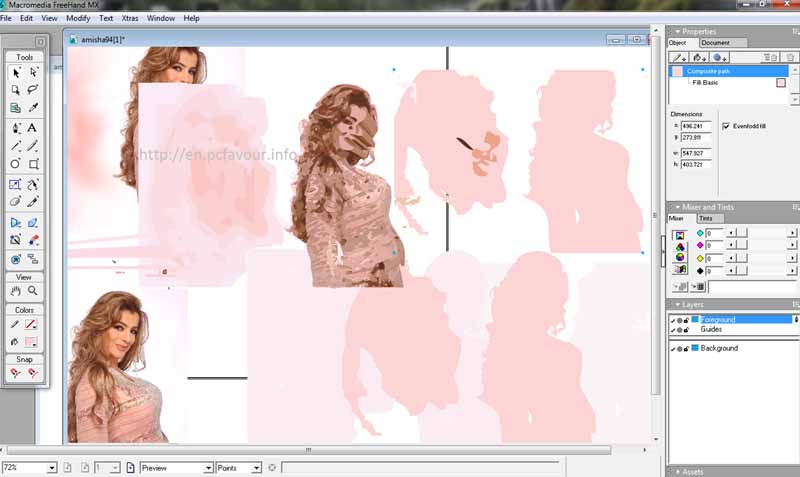 FreeHand was originally created by Altsys Corporation in 1988. It was licensed to Aldus Corporation for initial version 1 to 4. Aldus was merged with Adobe Systems in 1994. As adobe has already a similar application Adobe Illustrator, so because of overlapping market, FreeHand was returned to Altsys by order of Federal Trade Commission. Macromedia bought Altsys after some time so the version 5 through 11 was released by Macromedia (These versions are known by FreeHand MX).

Adobe Systems get owned Macromedia and all its products in 2005 included FreeHand MX. Although the development of FreeHand has been discontinued but it is still sold for Windows OS and Mac OS X. Adobe Macromedia FreeHand MX is available in about eight languages which are English, Chinese, Japanese, German, Italian, Swedish, French and Spanish.

Adobe Macromedia FreeHand is compatible with Windows 7. To run it on Mac OS X 10.6, you need to have a PowerPC code emulator Rosetta. It is also required a registration patch which you can get from Adobe Systems. Macromedia FreeHand version 10 runs without any problem on Mac OS X 10.6 and there is no need to get registration patch but you must have installed Rosetta. (Review by pcfavour)