Free download Teenage Mutant Ninja Turtles game for PC. It is arcade game developed by Konami for Sega games. It is very old game and memorable game for the kids of 80’s and 90’s. This game has four ninja turtles heroes Michelangelo, Leonardo, Donatello and Raphael. 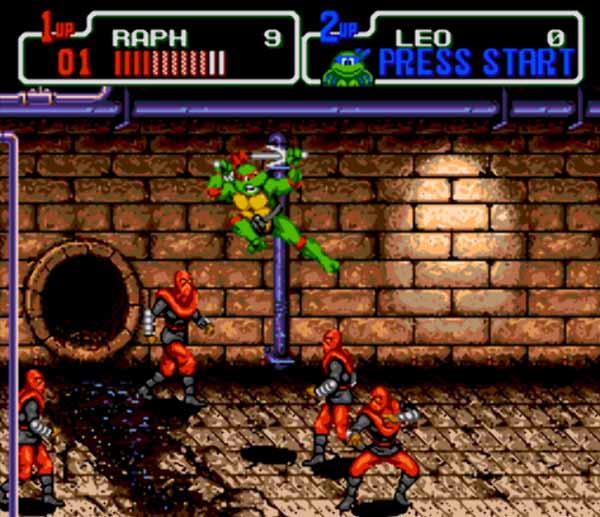 This game is available in Genesis to play on your PC. Download the Zip file from the link given below and then extract it. Now you are ready to play the game Teenage Mutant Ninja Turtles on your PC. The game begin when the Statue of Liberty and Manhattan start to disappear.

After starting the game, you need to select your player from the above mentioned heroes. Now you are ready to fight with the enemies. First round starts underground and you have to kill all masked enemies. Here you will also find some robotic machines.  In second round, you will came out from the underground. You will now on the roadside.

In third round, you will again go down to the sewerage line. In the end of the round, you will have to kill the first boss who will look like crocodile. You can hit him until he lay down. When he lay down, escape from him because he will crouch and your life line will decrease. After crouching, he will start to fire. You can escape or stop his fire by attacking him from the side.

After downloading the file, extract it. Now open the extracted folder and run the application file with the name “gens”. Now go to “File” and Select “Open ROM”. Browse and open the sub folder with name “roms”. You will see the file “TMNT.smd”. Now press “Enter” to start the game.

For Movement use Up, Down, Left and Right arrow keys respectively. For action, you have to use A, S and D keys from the keyboard. (Review by pcfavour)