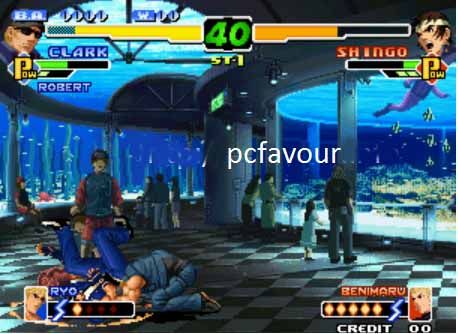 After the incident at the previous tournament, the commander of the Ikari Team, Heidern, is determined to figure out the objective of the NESTS cartel so that he can stop them from achieving their ruthless ambition. A fellow commander and long-time friend of Heidern, named Ling, tells the veteran fighter that K′ and Maxima were once operatives of NESTS and that they may hold the key to locating the whereabouts of the mysterious organization. Using this information, Heidern decides to focus his efforts in using the next KOF tournament as a way to lure both K′ and Maxima out so that they can be captured and interrogated into telling the authorities about the NESTS cartel. Unknown to Heidern, however, Ling has his own agenda.

The Hero Team from the previous game was split into two, with K′ and Maxima now joining forces with female agent Vanessa and Mexican wrestler Ramon, while Benimaru Nikaido formed his own team which consisted of Shingo Yabuki, agent Seth, and assassin Lin. The Fatal Fury Team replaced Mai Shiranui with Blue Mary, while Yuri Sakazaki left the Art of Fighting Team, with King, taking her spot. Mai and Yuri returned to the Women Fighters Team, this time being joined by Kasumi Todoh and high school student Hinako Shijo, who uses her own Sumo Wrestling style. Kyo Kusanagi and Iori Yagami once again returned as Team Edit characters. A third Team Edit only character also appears in the form of Kula Diamond, a young girl genetically engineered by NESTS to be the “Anti-K′”.

The gameplay is based on The King of Fighters ’99 and expands on the “Striker Match” format introduced in that game. The game now has an Active Striker System, which allows the player to summon the Striker member during any situation, whether the player is attacking or being attacked by the opponent, allowing the player to use their strikers in combos. Additionally, the player can now replenish Strike Bombs by either losing rounds or taunting the opponent (at the expense of one filled stock of the Power Gauge).

After downloading the game file, extract it and run WinKawaks file. After that go to File and select Load Game. Now click on “Rescan all” from right side of the console. After that you will see the game The King of Fighters ’2000: Millennium Battle  with NeoGeo system. Click on it and press OK button. The game will be started. Use to following keys to play and control:

Moreover, you can change them from Game>Redifine Keys> Redifine Keys Player 1. Now you are ready to enjoy the action of The King of Fighters 2000 game.