Free download JetAudio basic latest version. It is a shareware media player application for Microsoft Windows and Android which offers advanced playback options for a wide range of multimedia file formats. It was developed by Cowon Systems Inc. in 1997. Initially released in 1997, JetAudio is one of the oldest extant media players for the Windows platform. 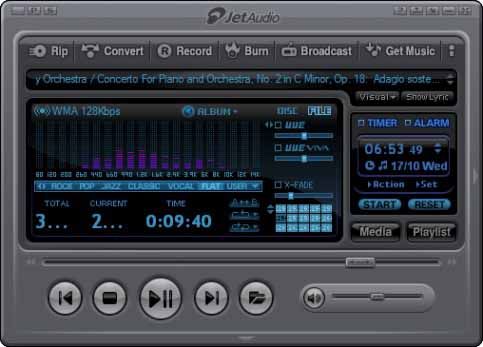 JetAudio’s user interface has similarities to that of (earlier versions of) Winamp in that it features separate windows for e.g. playback, playlist and music library. Like Winamp, JetAudio can also be minimized to a toolbar (what Winamp calls “Windowshade Mode”) by pressing the “Toolbar Mode ON/OFF” button in the upper right portion of the Main Window. The interface centers on a 10-band spectrum visualization which doubles as an equalizer. Different implementations of this spectrum visualization can be found in the Main Window, the Media Center, the Video Window, the Lyrics Viewer and the External Spectrum Viewer.

JetAudio comes with a number of pre-installed skins: “Default Gunmetal Grey”, “Default Silver”, “Default Silver Mini” and an older version of “Default Silver” with a potentiometer-style volume control. In addition to these, there are four skins that display the Main Window as a bar. Users are able to create their own skins using the JetAudio Skin Development Kit (SDK) available for download from the JetAudio website. Some skins apply to every part of the user interface (including the Main Window, Media Center, Video Window, Playlist Window and Lyrics Window), while others (especially older skins) may only affect the Main Window.

JetAudio has the ability to display both synchronized and unsynchronized lyrics to the music using several different methods. Lyrics are displayed in the dedicated Lyrics Viewer window (accessible by pressing the “Show Lyric” button above the timer module in the Main Window), along with the album art of the file and optionally a spectrum visualization.