Download Marvel: The Hulk free game, it is full of action pack game and published by Radical Entertainment. The game will start a gentleman scientist Bruce Banner and after a minute you’ll be the great Hulk with a big, strong, green and angry look. 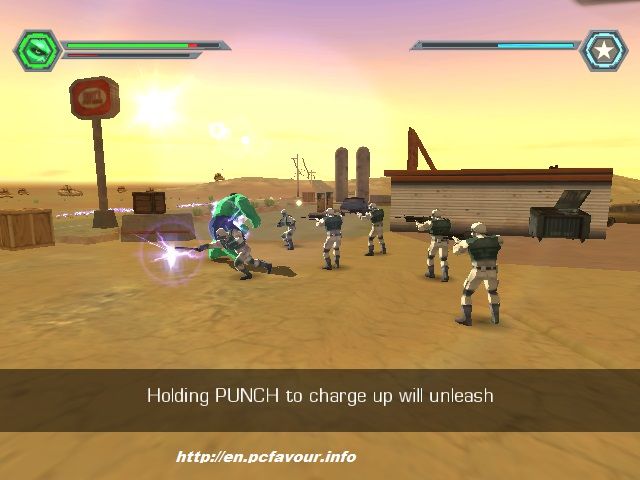 The Hulk game is designed and impressed by the movie of this game. Like the movie the game is almost same. The hulk is as powerful as in the movie and rival is Army chief. You’ll find the enemies; finish them all with a Hulk punch. There are 25 levels in New Game option and some scenarios are locked in Scenarios mode.

The game has 2 modes; you have to choose play the new game option. Avoid the scenarios mo.de. Hulk can smash his opponents and throw them away. The most interesting thing in this game is unlimited destruction. After becoming the Hulk, you can destruct all the things and enemies which will come in your way. The Hulk can smash the buildings, cars and even street lamps. You have to build the rage of hulk to make him powerful and his moves destructive. The graphics, smashing sounds and background sounds are amazing.

The Hulk game’s storyline and  script is beautiful planed and well written. You can hit your enemies by pressing the buttons w, s, d and f. These buttons are used to hit and smash your enemies in different directions. You can hit with jump by pressing ‘shift’ button. It’ll be more powerful. In start you’ll find it difficult but with the time being you’d love to smash all things.

You can kill your enemies with extra keys like CTRL and Alt too. You’ll learn by yourself when you play this game. In each round, at the end you have to face a strong enemy like a huge tank, war helicopter and much more. It is the free demo of game, just download it and enjoy with the angry Hulk and his smashing power. (Review by pcfavour)