Free download Super Sidekicks neo geo game for PC. It is a football game published in 1993, the original Super Sidekicks, known as Tokuten Ou, “Goal-Scoring King” in Japan, was SNK’s first soccer video game. It features 12 teams divided into two groups which compete for the “SNK Cup” (the main differences between teams is their formations on the field): 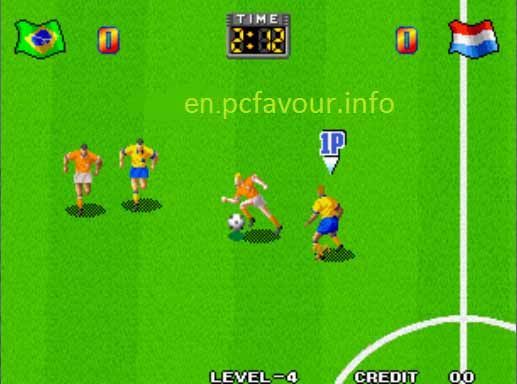 Your team plays against all the others in your group, and then it goes into an elimination tournament’s semifinals and then the final to win the cup. There was also a hidden feature in the game, which wasn’t documented, and affects a single player game. During a free kick for the CPU if the player has tapped button A for player two, the cpu performed a short-shot, while pressing the button A performed a longer kick.

One noted mistake was that Spain’s kit would actually resemble Portugal’s. Portugal would not be in the game until Super Sidekicks 3. On release, Famicom Tsūshin scored the game 25 out of 40.

After downloading the game file, extract it and run WinKawaks file. After that go to File and select Load Game. Now click on “Rescan all” from right side of the console. After that you will see the game Super Sidekicks with NeoGeo system. Click on it and press OK button. The game will be started. Use to following keys to play and control:

Moreover, you can change them from Game>Redifine Keys> Redifine Keys Player 1. Now you are ready to enjoy the football or soccer action of Super Sidekicks game on your PC.