Age of Empires II: The Age of Kings

Freedownload Age of Empires II: The Age of Kings PC game. It is RTS (Real-Time Strategy) video game of Age of Empires series that is developed by Ensemble Studios. The game has several versions and all of them are published by Microsoft Corporation. Age of Empires II: The Age of Kings was released on September 30, 1999 for Windows and Mac operating systems. However, its HD Edition was released later on April 9, 2013 because the lower graphics and resolution of original version was creating problem in running on latest and updated platforms. 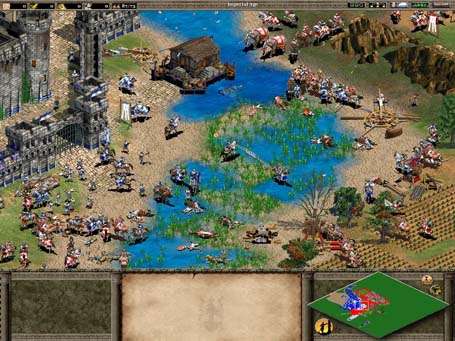 Age of Empires II: The Age of Kings is a next version to Age of Empires: Rise of Rome. This version has changed graphics and some more features are introduced in the game to make it easy to play. The gameplay changes are also made as the player can train multiple units/heroes at a time that will be added in queue to be created one after other.

The farms are available since the Dark Age in Age of Kings. Another remarkable option is added that you can now place a gate into the wall and that can be closed and opened as the player wants. The maximum population limit has been increased from 75 to 200. Although, this limit is too much limited however it’s better than older limit of 75.

Many new units, players, civilizations and buildings are also introduced in Age of Empires II. The Pop is now named as Monk and the cause to increase in your gold resources. The minimum number of resources in a mine has also been increased for gold, wood, food and wood. There is also introduced a button to find any idol villager i.e. you don’t need to search out the whole map to see if any villager has finished his job and standing idol. (Review by pcfavour)