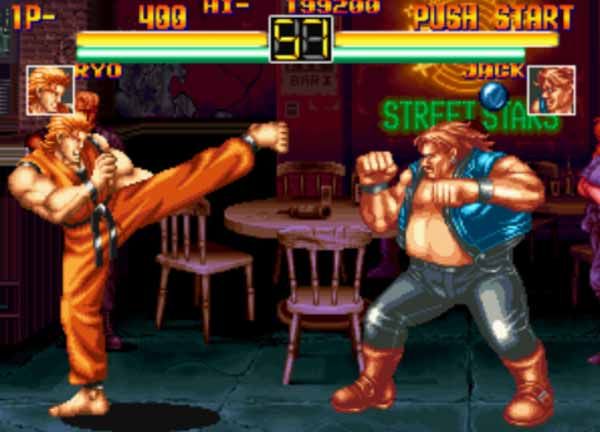 The game Art of Fighting is very light weight and can be played on Computer System. To play the game on your computer you can download the game from the download link given below. It is in compressed/zip folder. After download the folder, extract it and start to play according to the method given below.

When you start the game, you have to select the player. There are only two players that can be selected as your fighter. These are RYO and Robert. After selecting the player, you are ready to fight with. Your fight will be any of the fighters given in the list randomly. It is very difficult to defeat the opponent so be careful during the fight.

After downloading the game file, extract it and run WinKawaks file. After that go to File and select Load Game. Now click on “Rescan all” from right side of the console. After that you will see the game Art of Fighting with NeoGeo system. Click on it and press OK button. The game will be started. Use to following keys to play and control:

F3: To insert Coin
F1: To start Game
Movement: Up, Down, Left and Right arrow keys.
Action Buttons: A, S

Moreover, you can change them from Game>Redifine Keys> Redifine Keys Player 1. Now you are ready to enjoy the action of Art of Fighting game. (Review by pcfavour)