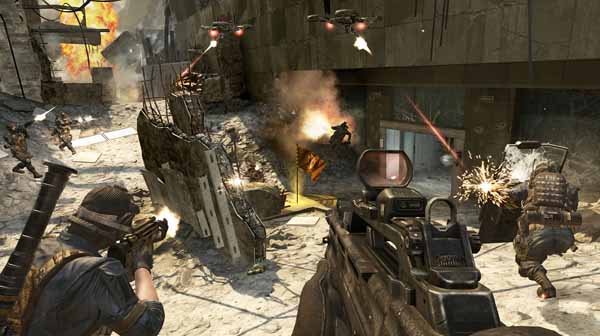 In a mission, you are your ally players are travelling in a military van with the president of United States. The city is attacked by enemies and all things are destroying. The jet, helicopters, police cars, buildings and bridges are attacked by opponents. Suddenly, the van is hit and failed to run. All of your allies come out along with president. Now your mission is to protect the president and take her to secure place.

You start to forward and cover the allies those are protecting the president. You can use heavy machine gun fixed in military van to hit the jet of enemies. Your default machine gun will kill the nearby enemies. At some point, you have to protect the president by covering above a broken bridge. You can use your sniper gun. You will also see some destroyed shops where you will find some enemies. Eliminate all using your favorite weapons. You need to forward with high care and protect yourself too from the enemies’ attack.

You will see a jet, showing “Use” option. Forward to it and start it to fly. Now it is quite easy for you to follow the president and hit all nearby enemies. You will see green colors for all your allies and four square points showing your enemies. Hit them all and keep following the president to protect.

Call of Duty Black Ops 2 is very interesting game full of action. Unfortunately, the official demo is not available. You can buy it to enjoy. (Review by pcfavour)